Mike Haynie, vice chancellor and founder of the Institute for Veterans and Military Families (IVMF), has been named to the prestigious HillVets100 list for 2019. The HillVets100 is an annual listing of the nation’s 100 most influential veterans, service members, and veteran-community advocates. Joining Haynie on the list this year is Nick Armstrong G’08, G’14,  senior director of research and analytics at the IVMF. 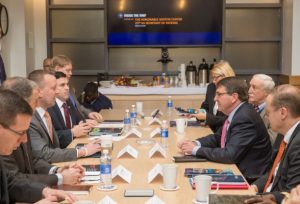 Mike Haynie (third from left) and Nick Armstrong (fourth from left) meet with (from right) Chancellor Kent Syverud, the 25th U.S. Secretary of Defense Ashton Carter and Sean O’Keefe, among others on campus.

HillVets is a nonprofit organization based in Washington, D.C., that works to facilitate collaboration and leadership opportunities in support of veterans interested in engaging in policy, politics or government. The annual HillVets100 listing is designed to highlight and recognize the most impactful and influential change-makers and advocates within the veteran community across the United States.