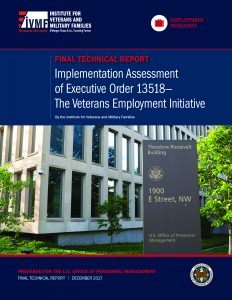 Syracuse, NY, December 14, 2017 — In an in-depth, extensive review of the Veterans Employment Initiative (VEI), the U.S. Office of Personnel Management (OPM) enlisted the expertise of the Institute for Veterans and Military Families (IVMF) at Syracuse University to understand how the Federal Government has implemented the VEI since its inception in 2009. The VEI is one of the most comprehensive efforts in U.S. history to expand recruiting, hiring, and retention of veterans in the Federal Government.

Nearly ten years ago, the unemployment rate for Gulf-War era II veterans was at an all-time high (12.1 percent). At the time, the U.S. economy was recovering from an economic crisis and thousands of veterans were looking for civilian work. In response to this need, then President Barack Obama signed Executive Order 13518—Veterans Employment in the Federal Government—creating the Veterans Employment Initiative. Since the start of the VEI, the number of veterans working in the Federal Government has increased by more than 100,000, and veterans now make up over 600,000 of roughly 2,000,000 federal employees. As one of the Nation’s leading employers, the Federal Government has maintained an historic commitment to employing veterans, and these numbers represent tremendous success. Nonetheless, the VEI and the process for hiring veterans still face a number of challenges.

“Our federal government has been a leading employer of U.S. military veterans for well over a century—and that commitment certainly bears out in this assessment,” says Nick Armstrong, Ph.D., Senior Director of Research & Policy at Syracuse University’s Institute for Veterans and Military Families (IVMF). “But the issue goes well beyond a simple matter of hiring more veterans. Many opportunities remain for the Administration and agency leaders to improve upon how the government leverages and retains the diverse skills and talents that veterans bring to the 21st century workforce. The IVMF is proud of the collaboration with the OPM to identify focus areas to advance, at the same time, veteran public service careers and federal talent management practice overall.”

Findings from the intensive, yearlong review show scattered performance in employing veterans across each of the Federal Government’s major departments and agencies. Since the start of the VEI, some agencies have nearly doubled the number of veterans they hire annually, while others have actually decreased their veteran hiring. Veterans still find it difficult to understand the Federal Government hiring process and federal human resources (HR) professionals and hiring managers still have challenges matching veterans with available jobs, thus causing issues regarding retention. Moreover, confusion and frustration exists over the complexity of the rules about hiring veterans.

Along with addressing the challenge of retaining veterans once hired, the study also highlights the need to overcome misconceptions that all veterans want jobs related to their military service. It also recommends more resources and better training are needed on the rules for hiring veterans in Federal Government positions, and promotes a renewed focus on recruiting, hiring, and retaining veterans in jobs that are a good fit for their skills and career aspirations.

Now, more than ever, is the time to revisit the VEI and veterans employment. The IVMF’s assessment provides a roadmap to help inform future policy and actions to further advance veteran employment opportunities in the Federal Government.