This article was originally published in 2017 but we think this story continues to remain relevant as we will never forget. 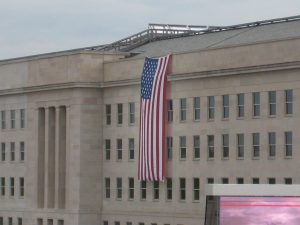 Today our country observes the 16th anniversary of 9/11. We honor and remember the men, women and children killed in the attacks at the World Trade Center, the Pentagon, and aboard Flight 93. For many Americans, that day profoundly changed people’s lives. For those serving in the military on September 11, 2001, that day immediately changed our mission, our focus, and our service.

The tragedies that took place at the World Trade Center and in the field in Pennsylvania where flight 93 landed were horrific and shocking. The tragedy that took place at the Pentagon, while equally terrifying, had a unique and lasting effect on those who continue to enter the building’s doors every day to serve in support of our nation’s armed forces. Thousands of people work daily in a building that smoldered and burned on 9/11. The building was rebuilt, but its occupants continue to remember. 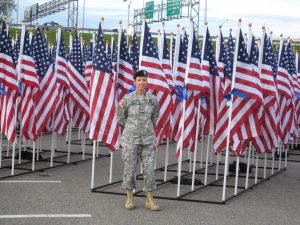 On September 11, 2001, my husband and I were both active duty Army officers stationed at Fort Hood, Texas. The days and months immediately following the attacks were full of uncertainty. I did not know then that a few years later, I would find myself reporting for work to the very building that had been struck by an airplane on that day.

I joined the Army Staff at the Pentagon in summer of 2005. The building had been reconstructed, and resumed regular operations. Security was increased, but no one hesitated to report for duty. I have to admit, it was a little unnerving occupying a cubicle within the walls of a structure that only a few years ago was hit by an airliner at the hands of terrorists.

The Pentagon memorial is unique. To honor the 184 victims, 184 benches are arranged according to the victim’s ages, and each bench bears the name of a victim. Each bench has a small pool of water beneath it. The benches representing the victims that were inside the Pentagon face the Pentagon where the plane hit; the benches representing victims aboard the plane face outwards, along the path the plane traveled. At the dedication, families collected at the benches, sitting and sharing memories.

For those of you who have not had the opportunity to visit the Pentagon Memorial, I recommend you put it on the top of your list for your next trip to our nation’s capital. Take the time to reflect, remember, and look across to the sturdy wall of the Pentagon that has been rebuilt. From rubble and ashes rose a sturdier and mightier symbol of our nation’s freedom. Today, 16 years later, the Pentagon walls are stronger, our nation’s military is stronger, and our country is stronger.