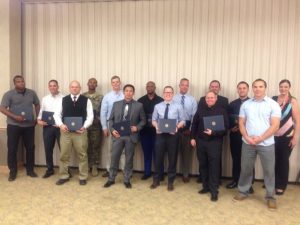 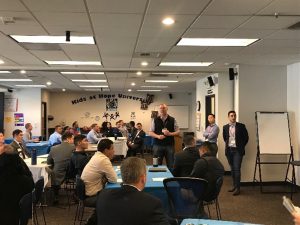 One of the first cohorts in the O2O program.

Back in early 2015 a round table discussion with senior military leadership, staff at Syracuse University, the Department of Defense, and the former Starbucks CEO/Founder Howard Schultz met to discuss Veteran unemployment and how they could collaborate to improve post military life for those who served.   What became of the discussion was the creation of Onward to Opportunity.  Onward to Opportunity was focused on providing no cost certifications in Information Technology (IT) and Customer Service with no utilization of DOD or VA benefits.

Initially the program offered certification pathways in IT or Customer Service and had its inaugural launch in the Schultz’s backyard at Joint Base Lewis-McChord in October of 2015.  The initial cohort had 16 active duty participants and proved to be an enormous success with 100% of the participants finding meaningful employment post-separation from the military.

Fast forward five years and now the Onward to Opportunity Program exists at over 15 DoD installations as well as offers a completely virtual model for those not located near one of the serving installations.  Not only do we serve active duty service members separating from service, but we have expanded the audience we serve to veterans of all eras, military spouses of all eras, and currently serving and former National Guardsman and Reservists.  In addition to expanding our audience, we have also drastically expanded our curriculum offerings.  We now offer certifications in areas such as Project Management, Human Resources, Information Technology, and many other areas and constantly are adding more courses.

The Joint Base Lewis- McChord program has continued to expand its reach as well, we now locally serve the entire state of Washington, including the Navy Region Northwest, Yakima Training Center, and Northern Oregon’s National Guard population.  Our Alumni population has grown considerably and is always anxious to “Pay it forward” by sharing their experience, but more importantly coaching current participants through the program as mentors.  To date we have had over 2,300 graduates from the Pacific Northwest and add more to that number every day.  “We have helped better the lives of thousands of people who have answered the call to serve their nation, I can’t imagine a more rewarding job” -Angela Condon, Program Coordinator for the Pacific Northwest Region.

As we wrap up another successful year, we look forward to continuing to serve our Military community in 2021.