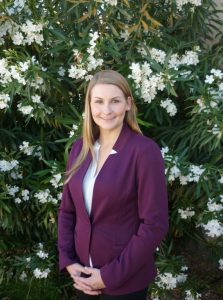 “Onward to Opportunity is one of the most comprehensive, challenging, and worthwhile programs for service members, spouses and veterans that’s out there right now. It’s a combination of pertinent curriculum and certifications. Additionally, the networking and the community connections that can be made through the program are invaluable. I really don’t think there’s another program out there that has all the pieces put together as well as the Onward to Opportunity does.”

Danielle Bootes spent over six and a half years in the Army, mostly in HR. When she first heard about O2O and its numerous course offerings and certifications, she was eager to find something that would complement her experience in the Army as well as her education. She decided to enroll in the SPHR Program to advance her HR knowledge.

To Danielle, her favorite part of the program was the diversity within the classes. She got to interact with veterans who had already been out, retirees, and military spouses. This was critical in helping her transition to civilian life.

She believes that the O2O program prepared her well for life as a civilian better than any other programs. She enjoyed having the opportunity to network with experts and other veterans. It gave her confidence that she’d be successful and that anything she put her mind to was possible.

Danielle wholeheartedly recommends the O2O program to service members, spouses and veterans. She says that the networking and community connections that can be made through the program are invaluable. Now, she gets to be the face behind the O2O program every day as IVMF’s Onward to Opportunity coordinator for the El Paso/Fort Bliss area and the Hawai’i Pacific Region.