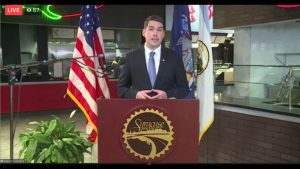 Yesterday on January 21st, Syracuse Mayor Ben Walsh announced the newest AmericaServes network, SyracuseServes, in his State of the City Address. IVMF’s national AmericaServes was launched in 2015 and was designed to help veterans and their families navigate and access services faster and more efficiently in their communities. Today, IVMF’s AmericaServes is acknowledged as the gold-standard for how public, private, and non-profit organizations work together to serve the veterans community. There are currently 17 networks across the nation as far as Dallas, Seattle, and New York City. Now, Syracuse is the next network to join in this collaboration. Syracuse Serves will be operated locally by the IVMF in the new National Veterans Resource Center on the Syracuse University campus and will consist of many existing community providers who already serve veterans independently, giving them the technology to work collaboratively to enhance service delivery.

Brought to you in a joint partnership with Syracuse University “The Best Place For Veterans”, the Institute for Veterans and Military Families, and Onondaga County, SyracuseServes will be based in the new National Veterans Resource Center on Syracuse University’s campus. SyracuseServes is a community-based collaborative and care-coordination center aimed at supporting veterans and their families in the City of Syracuse.

Currently, there are an estimated 42,000 veterans and family members in the Syracuse Community. The pandemic has hit many people hard and the veteran community is no exception. This will be the first step to continually support the Syracuse veteran community and strive to provide better access to all the services and resources available.