by Jillian Casey and Maureen Casey 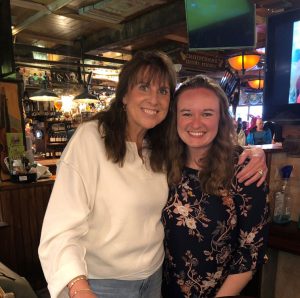 This year, in the month of March, two female generals were nominated to positions as 4-star combatant commanders: General Jacqueline Van Ovost and Lt. Gen. Laura Richardson. It is a significant milestone, but that it happened during Women’s History Month makes it an especially fitting time to remember that women have been “in the fight” for centuries.

It was not until the second term of the Obama administration, in late 2015, that the U.S. military lifted the ban on women serving in combat roles. The goal, according to former Secretary of Defense Ash Carter, was to guarantee the military was equipped to “recruit from the broadest possible pool of talent.” For the first time since that storied committee drafted a document declaring our independence in 1776, American women in all branches of the military were now officially permitted to be on the front lines, and they serve with commendable skill and relentless courage.

But, in the interest of transparency and historical accuracy—it was not exactly the “first time” that women have been “in the fight” and did so valiantly.

There was Joan of Arc: The Patron Saint of France.  About 75 years into the Hundred Years’ War, a young peasant girl in northeastern France received a message from God: lead the French to victory and expel the English from the country once and for all. Despite her lack of military training, Joan of Arc convinced Prince Charles of Valois to give her the chance to lead a French army—and she did so, achieving a momentous victory that eventually led the prince to be crowned King Charles VII. Although his court was exceedingly uncomfortable with how powerful Joan of Arc became, King Charles ordered the teenager into further battle. She was captured by allies of the English, and charged with more than 70 crimes, including witchcraft. In an attempt to distance himself from the implications of such charges, namely that the foundation of his reign was heresy and witchcraft, King Charles made no attempt to interfere on Joan of Arc’s behalf. She burned at the stake in May 1431, at the age of 19.

And we cannot forget the Irish in this month of March. Grace O’Malley: The Pirate Queen of Ireland, was the young daughter of an Irish Chieftain. She inherited her father’s responsibilities upon his death, and for most of her adult life, Grace controlled several castles acquired through conquest and marriage, each of significant strategic value in the defense of her ancestral lands. She lived a life of adventure, something incredibly rare for a woman of her time, but following her death in 1603, Grace O’Malley was largely written out of Irish history because of her gender, ignored by the typically male historians of the age.

Fast forward to the fight for our own independence, to Sybil Ludington: The Female Paul Revere. In April 1777, this 16-year-old daughter of a Patriot colonel rode more than 20 miles through rural Connecticut to rally her father’s men. The town of Danbury was under attack, but the regiment had been disbanded for planting season, the soldiers scattered across the countryside readying their farms. Colonel Ludington’s troops would arrive too late to defeat the British, but Sybil’s ride through dark woods and pouring rain rallied hundreds of Patriot soldiers eager to do battle. Despite her heroism, Sybil was denied a military pension, and died in poverty in 1838, at the age of 77.

For Sybil and so many women who followed in her footsteps, serving their country was a passion often too great to ignore, no matter the things—namely gender—that might’ve stood in their way. During the Civil War, it is reported that more than 400 women posed as men to fight for the Union Army, including Cathay Williams and Sarah Emma Edmonds. 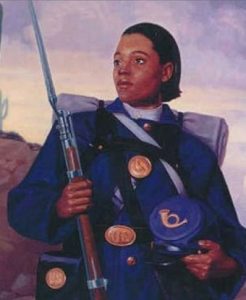 Cathay Williams was born in 1844 to an enslaved mother and a free father in Independence, Missouri. At the start of the Civil War, slaves in Confederate-occupied territory were forced to serve in military support roles, and Cathay accompanied the infantry all over the country as an Army cook and a washerwoman. After the war ended, she enlisted in the U.S. Regular Army under the alias “William Cathay,” but was unable to complete her three-year engagement when frequent hospitalizations for smallpox revealed her secret. She was honorably discharged, and Cathay then signed with an emerging all-black regiment that became part of the Buffalo Soldiers. She was the first African American woman to enlist and remains the only documented woman to serve in the U.S. Army during the Indian Wars.

Around the same time, in the mid-1850s, Sarah Emma Edmonds moved to Flint, Michigan and discovered life was easier when she dressed as a man. She enlisted in the military as a male field nurse named Franklin Flint Thomas, and her sense of duty saw her through the Second Battle of Manassas as well as the Battle of Antietam. The latter remains one of the bloodiest battles in U.S. military history.  Although there is no official record, Sarah Emma Edmonds reportedly served as a Union spy and infiltrated the Confederate army several times to gather intelligence for the federal cause. One of her aliases, a black man named Cuff, required her to dye her skin with silver nitrate.

When she contracted malaria, Edmonds’ military career as Franklin Flint Thomas was over.  However, once she recovered, Edmonds enlisted again, this time as a female nurse caring for wounded soldiers at a hospital in Washington, D.C. When the war came to an end in 1865, she published her experiences in Nurse and Spy in the Union Army. Sarah Emma Edmonds received an honorable discharge from the military, as well as a government pension, and she was the only female member of the Grand Army of the Republic.

In the generation between the Civil War and the dawn of the twentieth century, women across the societal spectrum fought steadfastly for equal rights, but by the time war broke out in Europe in 1914, American women still could not vote, let alone serve in combat. Still, in what by this point was, in essence, a tried and true American tradition, millions of women worked in manufacturing and agriculture at home, or as nurses or ambulance drivers on the front lines—anything to support the war effort. Two examples of note: The Yeoman (F) and the Signal Corps Female Telephone Operators Unit.

The Yeoman (F) were a consequence of vague wording in the Naval Reserve Act of 1916. In failing to mention gender as a condition of military service, the Act opened the door for thousands of women to enlist shortly before the United States formally entered World War I. Although they served primarily in secretarial positions, some of the Yeoman (F)—or “Yeomanettes”—worked as translators, fingerprint experts, and even ship camouflage designers.

And then there were the “Hello Girls,” the Signal Corps Female Telephone Operators Unit created by General John Pershing to improve communications on the Western Front. More than 200 women operated switchboards throughout Europe, and although they served long hours under combat conditions, the “Hello Girls” would not receive veteran status until 1977, when President Jimmy Carter signed the requisite legislation.

Not that the women who came after these trailblazers needed legislation to be inspired. Thanks in large part to the barriers broken by females during World War I, nearly 350,000 women would serve in uniform during World War II—at home and abroad. Rosie the Riveter symbolized the tens of thousands of women who went to work in factories across America to optimize production and supply the Allies with necessary material and munitions. On the front lines, women took on a variety of assignments: in the Army Nurse Corps, 16 women were killed by direct enemy fire. In the Philippines, 68 servicewomen were captured as POWs, and 565 women were awarded combat decorations for service in the Pacific Theatre. In Europe, according to Dwight D. Eisenhower, “The contribution of the women of America, whether on the farm or in the factory or in uniform, to D-Day was a sine qua non of the invasion effort.” But when they came home, they were challenged in leveraging their courage and their sacrifice to access the benefits afforded to their male counterparts—including the GI Bill.

For generations of women, it is a familiar story, and it is similar for each succeeding conflict. Women have been and will continue to be “in the fight,” serving in or supporting our military, regardless of the conditions or the compensation—or lack thereof. Their passion for service has never been contingent on recognition, but as Women’s History Month draws to a close, it is more important than ever to acknowledge the warriors who came before us—and consider how we might pave the way for those who will come after us, for that is the greatest of all American traditions—if we’re going to talk history.