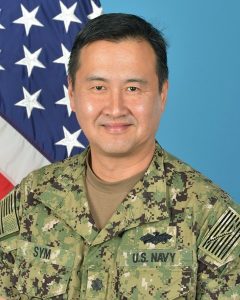 Jonathan Sym is a Commander in the U.S. Navy Reserve and continues his service after more than 22 years. His most recent deployment was in 2018 where he served as the Chief of Staff for the U.S. Special Operations Command operating in North and West Africa with its headquarters in Baumholder, Germany.

“It was an amazing tour, the best tour I have ever had,” said Sym. “Though I’ve served in many joint operations, this [deployment] was the first time I’ve had the privilege of working with the special operations community.”

During his tour, he served with Army Green Berets, Marine Raiders and Navy Seals. His first deployment was in support of Kosovo Operations in 2013, which involved service members from other branches including military forces from 19 NATO countries.

“To this day, many of us are still very close. We see each other once in a while and stay in touch through social media,” said Sym about the bonds and mutual respect people gain through serving together. “When you go through difficult situations with people in the military, particularly in hazard duty zones, they become lifelong friends.”

Sym’s camaraderie with members of other military branches, in part, led him to the Veterans Program for Politics and Civic Engagement (VPPCE). Sym’s neighbor and former Army Officer and West Point graduate Raymond Wong recently participated in this collaboration between Syracuse University’s Institute for Veterans and Military Families and Maxwell School of Citizenship and Public Affairs. Wong told him about VPPCE’s overview and actionable strategies for running for political office. Wong told Sym he should apply if he ever decided to run for office.

“Party affiliation is overrated, in my opinion. I’d find that most folks are left and right of the political center and have very similar views. Ray and I may be on opposite sides of the political fence, but we share many core values and always have good discussions,” Sym commented. “He’s a good man and I’m blessed to have him as a friend.”

Taking Wong’s advice, Sym completed VPPCE with the intention to learn everything he could for a potential future race.

“I’m just a frustrated average guy,” Sym commented.  “As a small business owner, a Navy reservist, and as a father of two young kids in public schools, I see what 2020 has done.”  Sym found himself feeling powerless, and simply venting to like-minded friends wasn’t enough. “Our elected officials in New Jersey didn’t adjust policy, they didn’t manage legislation as things changed. It’s been a one size fits all strategy since the beginning of the pandemic.”

When Sym was recently contacted about exploring the possibility of running for a state office by New Jersey Assemblyman Brian Bergen, he felt like he needed to act.

“I just couldn’t stay on the sidelines anymore,” he said. “The timing of completing this course and candidacy was quite serendipitous. I got the call from around the same time I received my graduation diploma. To this day, I find myself looking back on the lessons I learned, I’m going back checking my notes frequently.”

He combs his notes for what he calls “nuggets of gold”, helping him recall the “ah-ha” moments he had in VPPCE and using it his campaign.

The same sense of mutual respect and admiration Sym described about members of other branches also extended to veteran participants with different political affiliations. “The Veterans Program was intended to bipartisan or nonpartisan. This made for good discussions.”

“It [the program] was helpful for everyone and I think my classmates will also echo the same sentiment,” says Sym. “The lecturers and guest speakers were very accessible and genuinely interested in helping us develop as viable political candidates. I wish it didn’t have to end so soon, quite frankly.

VPPCE has given Sym a new level of confidence going into his very first political race. Sym says the IVMF and the Maxwell program delivered the core elements of what people need to understand when running for any type of office.

Commander Sym gained new perspectives and insights unbeknownst to him prior to enrolling in the program, stating “the fundamentals we learned are invaluable. I’m a big fan of the program, a big supporter of Syracuse and Maxwell.”

IVMF & Maxwell are currently accepting applications for the 2021 VPPCE class. Interested in politics? Learn how you can apply.