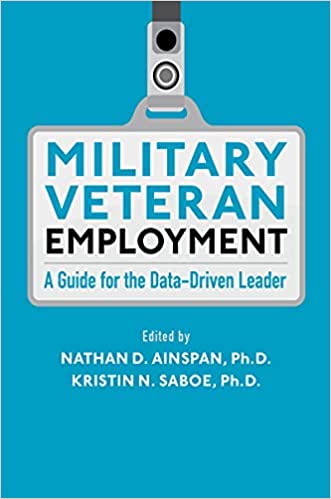 IVMF is proud to have Executive Director Mike Haynie and Research Associate Deborah Bradbard share their insights and knowledge in Military Veteran Employment: A Guide for the Data-driven Leader. According to Amazon the book: “Draw[s] on the principles and research from industrial/organizational (I/O) psychology and best practices from human resources (HR) management, this book will help civilian employers improve the way that they locate, hire, and retain military veterans and military spouses.” What sets this book aside from others is that it uses “scientific research rather than case studies from large companies” to determine the best practices in supporting veterans in the workspace. It includes chapters from a variety of authors including military veterans sharing their personal insights as well as examining Reservists and Guardsmen that are often overlooked.

Here’s a brief glimpse at the piece Bradbard authored about military spouses on employment:

Learn more about the book Military Veteran Employment: A guide for the Data-Driven Leader.