The following is the opening statement at the National Veteran Resource Center building dedication on 11/3/21 given by Dr. Mike Haynie, Vice Chancellor of Strategic Initiatives and Innovation at Syracuse University and Founder of The Insitute for Veterans and Military Affairs. 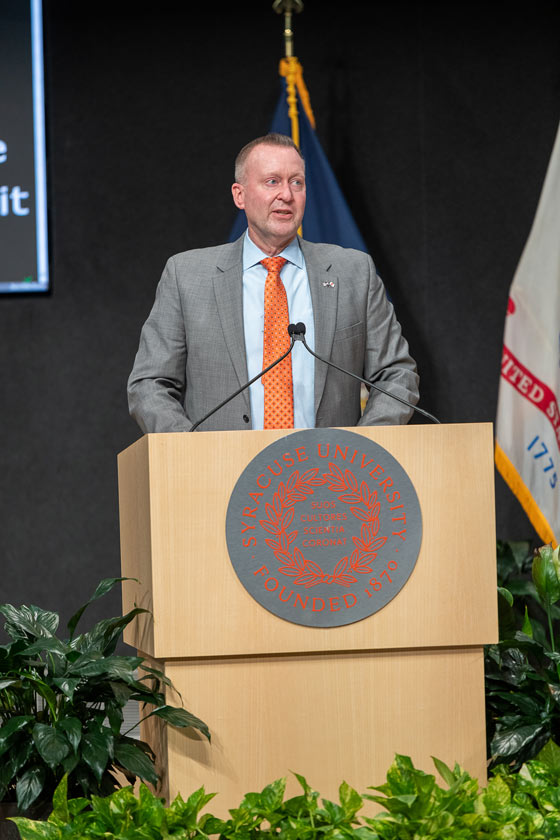 Good Afternoon. There are many, many people and organizations who made it possible for us to be here, celebrating this remarkable, National resource.The D’Aniello Family, Dr. KG Tan, the Bisignano Family, the Lachowicz Family, the Haydon Family, the Ensley Family, the Dottle Family and many other families and supporters who helped make this building and our programs a reality. To JPMorgan Chase, Howard and Sheri Schultz, Fiserv, USAA, Boeing, Walmart, Lockheed, the U.S Small Business Administration, and the many other partners to the IVMF who – over the past 10 years – have made it possible for the Institute to provide training and supportive services to more than 160,000 veterans and family members. Thank you!

To my friends and colleagues at Syracuse University, and to our Board of Trustees who charged and empowered us to be the best University in America for veterans and their families. Thank you! And my wonderful teammates at the IVMF and OVMA, whose work every day gives meaning and purpose to this building. Thank you!

Some of you were here yesterday, when we cut a symbolic ribbon, and formally dedicated the National Veterans Resource Center at the Daniel and Gayle D’Aniello Building. Today we’re here to celebrate all the ways that this remarkable facility – and the innovative programs, research, and services that originate from this place – will impact veterans and military-connected families in Central New York and across the nation. In the time I have today, I want to share my own reflection on the question I’ve been asked most in the run-up to formally opening the NVRC.

That is, “why create an academic facility, at Syracuse University or anywhere else, focused on veterans and their families?” Read between the lines and what I’m really being asked is “why should I care?”

Now I know today is meant to be a celebration, I had second thoughts, about answering that question today, in the way I believe it should best be answered – which is honestly. I say that because if I’m authentic in my answer, I may be accused of throwing a bit of cold water on the celebration theme.

I also know that many in this audience already understand why this commitment matters; and thus, for some, getting on my soapbox will be akin to me preaching to the choir. That said, I also don’t think I’d forgive myself if I didn’t take this very public opportunity to be direct, and candid, and true to what I’ve learned over the past 15 years working and researching on behalf of the veteran’s community.

So here we go – my candid and direct response to the question “why should we care about the events of today,” in two, related parts.

First, we should care because –

If I can borrow a quote from Thomas Jefferson – “A nation, as a society, forms a moral person, and [therefore] every member is [morally] responsible for society.”

Now I can’t imagine a more morally troubling decision that a society can make, than the decision to wage war. And following Mr. Jefferson’s logic, all members of that society are morally obligated and accountable for the costs and consequences associated with the decision.Importantly however, over the past 20 years at war, this country has largely disconnected the costs and consequences of war from the majority of American families, and American institutions.

You see, after Vietnam we introduced, for the first time in our history, an ‘all- volunteer’ model of military service. Consequently, over the past 20 years of sustained conflict, less than 1% of Americans have shouldered the burden of our wars. My point is to say that insulating society and its institutions from the human and financial consequences of war is immoral, and it’s also exceedingly dangerous.  That is because when only “some” Americans shoulder the burden of war—war as an instrument of foreign policy is too easy a path for politicians to walk. It also means that for the small minority of Americans who fight those wars, when they come home and some require support and care, those needs are too easily dismissed as “the government’s problem.”

So part one of my answer, why we should care: The National Veterans Resource Center represents, in both a symbolic and practical way, Syracuse University’s commitment to paying on the moral obligation inherent in a model of national defense, where the many benefit from the service and sacrifice of a few.

I hope other institutions – particularly in higher-education – take notice and find the courage to reflect on their citizenship obligation – one that I’d argue goes beyond simply accepting GI Bill tuition dollars. The second ‘part’ of my response to the question “why should we care,” also relates to this country’s all-volunteer military service, but specifically the implications that the policy has – at a human level – for those who volunteer to serve.

Several years back I gave a TED talk at the University of Nevada – a talk where I shared my belief that the advent of the all-volunteer model of military service has served – albeit unintentionally – to seed a social and cultural chasm in contemporary American Society. It was a provocative and at times an uncomfortable discussion – exactly as I had intended it to be. And while it’s not my intent to repeat that talk here tonight, I do want to recount [briefly] the core story I shared that night, to drive home what for me has become the central, motivating theme for the work my team does here at Syracuse University.

Specifically, in Nevada I shared the story of an experience I had on an airplane and how on this particular flight the Captain asked the passengers to acknowledge two young, uniformed soldiers that had just boarded the plane. The passengers gave these soldiers a polite round of applause, but I described how the woman sitting next to me made quite a show of her support clapping and whistling. At this moment – the social scientist in me saw an opportunity to conduct an impromptu social experiment. So, I introduced myself to this woman, shared I was veteran – and that today I direct an academic institute focused on the issues and concerns impacting veterans and their families.

We had a nice chat, at least up to the point where I started talking about some of different challenges some veterans face after their time in uniform comes to an end. I shared with her, for example, that far too many veterans of the post-9/11 generation – especially the youngest – struggle to find a job after they leave the military, possibly because approximately 30% of them are learning how to live with a disability connected to their service. And then I shared with her the fact that 20% of the nation’s suicides are veterans, even though veterans represent less than 6% of the population. I told her that on average, 21 veterans take their own lives every day in America…about one every 80 minutes. And that’s exactly when our conversation ended.

She looked at me and said, “I just don’t believe it. None of that can be true. Didn’t you see us all clap for those soldiers? America supports our veterans.” I thought maybe I had gone too far that is, until the kid sitting on the other side of the aisle tapped me on the shoulder.

He looked at me square in the eye, stuck out his hand, and simply said, “Thanks.” This young man’s name was Tim, and he was a veteran.

Tim volunteered and enlisted in the Marine Corps when he was 18. He served five years and spent three of those years in Iraq and Afghanistan. He got out just six-months ago, and his plan was to go to school and get his degree. He seemed ashamed to tell me he only lasted about 2-months on his college campus. He said he just didn’t fit in. He’s been trying to find a job, but no luck so far, and he’s hoping the VA the docs can figure out soon how to stop the ringing in his ears, so he can get more than a few hours of sleep each night. But it was what this young man said next, that fundamentally changed my understanding of the work we do here.

He looked at me – his eyes actually welling up with tears – and said “Mike, worse than all of that, since I’ve been home, I feel anonymous.”

Now I’m a veteran myself, and someone who – at this point – had been engaged in the veterans’ community for several years. But I can honestly say that it was at this moment – on that airplane – that for the first time, I truly understood the insidious nature of a model of military service that is purposefully designed such that a small minority of Americans, are asked to shoulder the burden and moral injury of war, on behalf of the rest of us. Just the contrast that I experienced at that moment was enough to give me goosebumps.

On my right was a women, now with headphones on and lost in some reality TV program, who was profoundly ignorant of the issues and challenges facing the young man on my left challenges that stemmed directly from his service on her behalf. A young combat veteran who’s telling me that – in the context of all the hardship he has and will endure – that what weighs on him most now that he’s home, among the very people who sent him to war, is that he feels anonymous.

The point I wanted to make when I shared this story in Nevada – is exactly the same point I want to make now, in the context of the question, why should we care about the commitment and work that this facility represents.

I’d ask you to really reflect on why Tim feels, and too often is, anonymous?

Tim is anonymous because less than 1% of Americans have shouldered the burden of the past 20 years of war. And for that reason, odds are that Tim – or those like him – aren’t the son, daughter, husband, wife, brother, sister, classmate, teammate, or even friend of your average American family. And because Tim isn’t any of those things to so many Americans, not only is sending him to war is easy, but so is dismissing quid-pro-quo that arguably should come with a model where the few serve the many.

But here is the thing about that quid- pro-quo – it’s not a high bar.

So part two of why we should care:

The National Veterans Resource Center represents, in both a symbolic and practical way, Syracuse University’s commitment to Tim – to telling his story and creating intellectual and social ‘collisions’ between those who have served and those who have not, to facilitate knowing, and inclusion, and understanding, and empathy.

So, I will conclude where I started, by saying thank you – but this time on behalf of Tim, and the many like him in this very room, who – because of all those who made this this remarkable space and place possible – will no longer be anonymous, while among us.