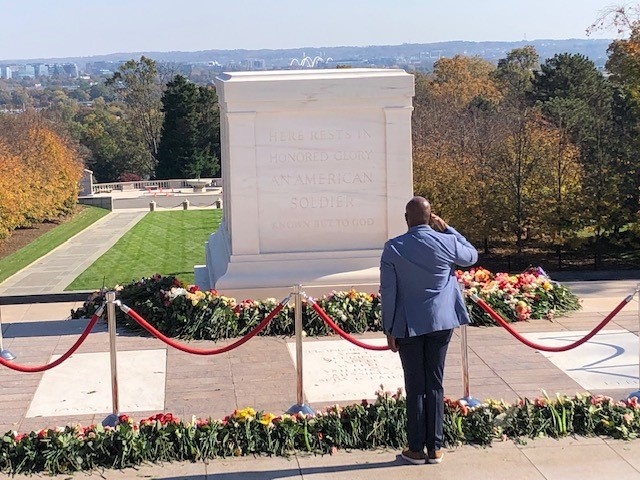 U.S. Army veteran Bart Womack proudly served for 29 years as an enlisted service member, deploying to such locations as Haiti, Kosovo and Iraq, and retiring as a command sergeant major. But it was his assignments as part of the military guard at the Tomb of the Unknown Solider at Arlington National Cemetery, Arlington, Virginia, that is a special highlight for him in service to his country.

“I tell people that was the best duty of my career, because I didn’t think of it as a job,” says Womack, a program manager for Onward to Opportunity with the University’s Institute for Veterans and Military Families. “It wasn’t about me, ever.”

On Wednesday, Nov. 10, he was back at the hallowed ground to help commemorate the tomb’s 100th anniversary, placing a flower on the Tomb of the Unknown Soldier.

For the first time in nearly 100 years, and as part of the centennial Commemoration, the public was able to walk on the Tomb of the Unknown Soldier Plaza and lay flowers in front of the tomb on Nov. 9 and 10. The tomb was designed by Lorimer Rich a 1914 School of Architecture graduate who won the commission through a national competition. This week’s event allowed visitors to personally pay their respects to the unknown soldiers, a privilege otherwise given only to “The Old Guard,” the sentinels of the 3rd U.S. Infantry Regiment.

“What an absolute and historic honor it was to be among thousands of people from around the world who paid their respects by placing flowers at the Tomb of the Unknown Soldier in Arlington National Cemetery,” Womack says. “In this celebratory gesture commemorating the 100th anniversary of the Tomb of the Unknown Soldier, there were 50-minute waiting times to make your way onto the coveted plaza and stand in front of one of the United States’ most precious gifts.”

Womack became the 318th tomb badge holder. Only the astronaut badge is awarded less often in the U.S. Army.