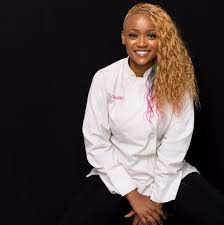 Chef Tiffany Moore is strong and resilient. She has needed to be – survival hasn’t come easy.

Moore always wanted to join the military. She earned the distinction of Ms. JROTC in high school and planned to join the service after college. But when her college plans became derailed, an Army recruiter was at her doorstep three weeks after high school graduation and Moore left for basic training a couple months later on September 5, 2001.

Initially wanting to be a cook in the service, Moore left basic training as an ammunition specialist. On deployment in Kuwait in 2004, Moore suffered a freak neck injury while moving a pallet. Over a period of a few years, the injury progressed from minor nuisance to pain and numbness in her hands. Doctors assumed carpal tunnel syndrome due to the increased time Moore was spending performing admin duties at a desk.

In 2011, in the middle of the night, Moore awoke to find that she was paralyzed from the neck down. “My mind was saying move, but my legs were not moving,” Moore recalled. The paralysis was temporary, lasting an hour before going away, but it would return a few times a year.

In October 2012, during Moore’s medical board process, the paralysis happened while on duty for the first time. She was put on emergency bed rest because her C4 and C5 vertabrae were touching her spinal cord and her spinal canal was compressed and blocking the flow of spinal fluid. Doctors informed her that something as simple as a sneeze or laugh could put her into permanent paralysis. Despite the grim outlook, Moore was finally feeling validated with her injuries after suffering with excruciating pain, numbness, and recurring paralysis for nearly eight years.

Surgery provided Moore with relief for about six weeks until the pain returned due to permanent nerve damage. Two years later, another surgery was performed, this time on her C5 and C6 vertebrae after numbness, weakness, and pain persisted on her right side.

Moore did not lose her passion for cooking throughout her trials but was losing hope that she would be able to pursue it as a career. She was repeatedly denied the opportunity to go to culinary school by the VA due to her medical issues.

Determined, Moore started a cupcake company in 2009 and had a brick-and-mortar location in the Atlanta area. Two years later, her brother passed away from sickle cell disease. Moore closed her business as she grieved.

Having felt a lost sense of purpose, depression took its toll on Moore for years. But in 2016, she picked up and traveled the world to rediscover what brought her joy and her purpose became clear.

Moore started catering in 2017, and soon thereafter, an advertisement for Escoffier Culinary School popped up on Moore’s Instagram feed. This was the opportunity she had been searching for!

She graduated with honors from Escoffier in 2019 and was asked to speak at her graduation.

“When you’re following your purpose and living in your purpose, everything comes into alignment,” said Moore.

Today, Moore, a 2020 Veteran EDGE graduate, has a thriving catering business in the Atlanta area and lives by the philosophy “I am your connection from farm to table…your palate is safe in my kitchen…let me nourish you…feeding you life and electrifying your well-being.”

In addition, she has caught the attention of numerous producers of cooking-related television shows, including representatives from The Food Network and FOX. In fact, you can see her on the upcoming high-stakes cooking competition series “Rat in the Kitchen,” premiering Thursday, March 31, on TBS at 9:00 p.m.

View the “Rat in the Kitchen” trailer