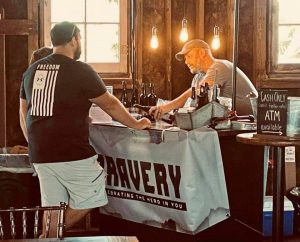 When Corey Christman retired from the Air Force in 2012, he had plenty of military experience as a special agent. He also had a few years of experience as an amateur wine maker. Before parlaying his passion into a new profession, he first leveraged his MBA and military experience as a corporate consultant. A few steps into a PhD program in organizational development and professional leadership moved Christman to recalibrate. In 2014 he decided to turn his winemaking hobby into a full-blown business, and he launched Bravery Wines in 2020.

At first blush, six years may seem like a long time to get a new business up and running. Years into his entrepreneurial journey, people would often ask him, “What’s taking you so long?” He’d brush it off and say he’s just a country boy trying to make it, or maybe he doesn’t learn as fast as other people. Really what he was doing was a whole lot of entrepreneurial learning to prepare his business for success.

“There have been a lot of well-intentioned people, and while they mean well, I think they worried that maybe I was investing too much time and effort,” he said. “But when I went into it, I didn’t want to be another wine brand. I wanted to create something special and meaningful that people enjoy.”

Christman completed enology and commercial winemaking operations courses at Washington State University. He flew from the East Coast out to Napa Valley to learn from another veteran winemaker who answered all of his thoughtfully prepared questions. He approached industry experts in his home region, the Finger Lakes in upstate New York to learn even more. There, he found mentors John and Ann Martini, owners of Anthony Road Wine Company, and head winemaker Peter Becraft. He took on an internship to learn the ins and outs of the business, literally. One of the prerequisites of his tenure was that he could fit inside the wine tanks, as a big part of winemaking is keeping them scrubbed clean. He also completed IVMF’s Entrepreneurship Bootcamp for Veterans (EBV), which was a new program at the time.

“I was all-in with EBV when I found out it was a quick-start guide,” said Christman. “The staff, the dedication, the professionalism, they all take the operational points you’d learn in business school, tell you to focus on the bite-sized chunks, then equip you with professionals like marketers, attorneys, to help you get going. I could take what I’d learned in wine school, and what I learned in books to make the best wine possible.” 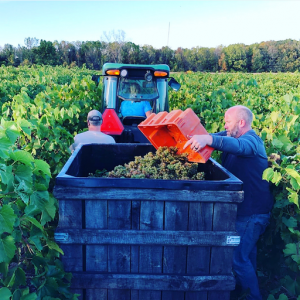 While Christman’s ambitious goals may have taken years to ferment, today he’s reaping the rewards of dedication and hard work. The New York Wine and Grape Foundation awarded Bravery Wines for all six of their submissions in the 2022 New York Wine Classic. Bravery Wines won three gold medals and three silver medals, and their honors include the overall Best Medium-Sweet Riesling and Best Sauvignon Blanc.

“We were blown away by that recognition. We always stay very humble, but I’m a big fan of believing what’s possible,” said Christman. “Back in 2014, I had no idea that I would have my own wine label. I had no delusions that we’d do anything but put one foot in front of another.”

Christman instinctively references the mental toughness and resilience that veteran entrepreneurs already know very well, because they’ve trained to accomplish difficult missions. In this case, Christman’s entrepreneurial mission was to operationalize his hobby and learn the necessary skill sets to build a wine business. One of the skills he needed as a special agent proved vital in his approach to being a business owner.

“As an investigator, you talk to a lot of people you don’t know, and in starting this business, I talked to all kinds of people,” he said. “I’d say, ‘listen, here’s me. I don’t know about making wine, or the wine business, but I’m bold enough to send you this message, and just talk to me about what’s possible.’”

He also stresses some key differences, including for example, that business processes aren’t always linear. Unlike in the military, not every process you go through as a business owner is a checklist. He’s had to consider various liabilities and learn how to ask the right questions and seek help from a full range of resources.

“Military folks, both spouses and service members, many of us are not always comfortable asking for help, for whatever reason,” he said. “There’s no shortage of quality information available out there. Every time I’ve asked for help from someone and it’s genuine, I’ve gotten a 100% response rate. The end result is if you ask for help, you will find it.”

Some other key lessons he’s learned from EBV include using your BAIL team, which includes a banker, accountant, insurance agent and lawyer.

“I’d go so far as to say if you’re not prepared financially or otherwise to have a person in each of those slots, then you really should rethink your entrepreneurial journey,” he said. “You could be setting yourself up for something that will cost you more in the long run.”

When it comes to what’s next for Bravery Wines, Christman is staying humble and intends to keep growing and learning, with plans to add more techniques and make more red wines next. “We’re thankful that we have a big military following,” he said. “We put our heads down, we work side by side with other wineries to support each other, and we’re very appreciative.”