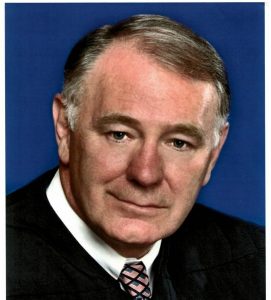 The D’Aniello Institute for Veterans and Military Families at Syracuse University extends our heartfelt condolences on the recent passing of the Honorable Norman Mordue ’66, L’71, who served as the senior judge of the federal North District of New York. Mordue, who also served in the U.S. Army during the Vietnam War, was a renowned supporter of veterans in the Central New York region and a well-respected member of the community.

Mordue grew up in nearby Elmira, New York, and attended Syracuse University on a football scholarship. He played as a half back on the team under the famed coach Ben Schwartzwalder, who had also served in World War II during the historic Normandy landings on D-Day.

Mordue was more than just a student athlete at Syracuse, he was also a member of the university’s U.S. Army Reserve Officer Training Corps Detachment despite being on a scholarship for sports. Furthermore, he graduated having been acknowledged as a Distinguished Military Student and Distinguished Military Graduate. Years later, he was also inducted into the Syracuse University U.S. Army ROTC Alumni Hall of Fame.

After graduation, Mordue accepted a commission as a Second Lieutenant in the U.S. Army and deployed to Vietnam from 1966 to 1968, where he served as a platoon leader in the air cavalry. For his actions while in combat he was awarded the Distinguished Flying Cross, the nation’s second highest award for valor after the Medal of Honor. He also received the Bronze Star, Purple Heart, and the Combat Infantryman Badge, and was ultimately medically retired from the U.S. Army in 1968 due to wounds sustained during combat operations.

Mordue returned to Syracuse University after his military service and graduated from the College of Law in 1971. Upon his graduation he began his legal career with the Onondaga County District Attorney’s office and would ultimately rise through the justice system to become the senior federal judge for the region’s federal court.

Mordue’s service to the legal community extends beyond the courtroom though, for several years he taught at the College of Law at Syracuse University as an adjunct professor. Former students visited his online obituary over the weekend to express their appreciation for the impact Mordue had on their lives and careers and express their sadness for his loss. He was awarded the Onondaga County Bar Association Ruger Award in 2016 and the Syracuse Law Honor Award in 2022.

In addition to his military service and legal accomplishments, Mordue was a generous supporter of Syracuse University’s veterans initiative and volunteered his time and energy for his fellow veterans in Central New York. He was a member of the Vietnam Veterans of America as well as the American Legion and was selected as the Grand Marshal for the CNY Veterans’ Day Parade earlier this year. He was also instrumental in the development and installation of the Onondaga County Korea-Vietnam Veterans Memorial located in downtown Syracuse.

His presence will be missed among the veterans of Central New York and the Syracuse University military-connected community mourns his passing.