Authors: From the Department of Applied Research at Blue Star Families in partnership with the Rosalynn Carter Institute for Caregivers, supported by the Institute of Veterans and Military Families at Syracuse University.

Caregiving in Military Families, a special report by Blue Star Families created in collaboration with the Rosalynn Carter Institute for Caregivers and supported by the Institute for Veterans and Military Families, examines these two circumstances in combination: caregiving in military families. For the first time, you can get an unprecedented view of this special population through a focused exploration of data from the 2020 Military Family Lifestyle Survey. Learn how many military families are caregiving, who military caregivers are and who they are caring for, how the military lifestyle affects caregiving, and more. 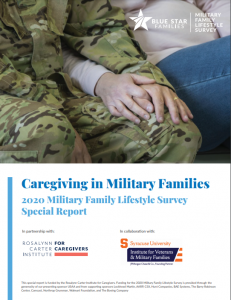 Caregiving in military families is common, but these caregivers differ from their counterparts in the general population in many ways. Caregiving in military families does not fit conveniently into a single paradigm. It takes many forms and encompasses a variety of caregivers and care recipients. Caregivers in military families may not recognize the tasks they are doing as “caregiving” or define themselves as an “unpaid caregiver.” Caregivers in this sample were younger than caregivers in the general population, and a greater proportion were female and married. They are often caring for more than one care recipient, such as a child with special needs, a typically-developing child, and a parent or grandparent, all at once. Their care recipients most commonly have “invisible” conditions, such as emotional or mental health concerns, in comparison to general population care recipients, who are older and more often have physical health concerns.

These caregivers do have commonalities with their peers in the general population in that both groups report mental and physical health challenges and financial concerns. Caregivers in military families, however, often have to balance caregiving responsibilities with the military lifestyle. The military lifestyle brings a unique set of challenges, often prioritizing military service obligations and day-to-day military job demands over family and caregiving needs. It can include separations from the service member, isolation from family and friends, and frequent relocations for active-duty families that require re-establishing local support, which may be challenging for families who have additional caregiving needs. Caregivers in military families experience the same military lifestyle challenges as their military non-caregiver peers and their top issues reflect those of military families at large, but some “typical” stressors may be intensified or carry a different meaning for caregivers.