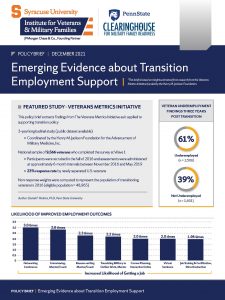 A national sample of 9,566 veterans who completed the survey at Wave 1.
—Participants were recruited in the fall of 2016 and assessments were administered at approximately 6-month intervals between November 2016 and May 2019
—23% response rate by newly separated U.S. veterans

Non-response weights were computed to represent the population of transitioning veterans in 2016 (eligible population = 48,965)

Why is this important?

Currently there are over 45 programs* across the federal government focused on employment transition support. This research puts measurement to the most effective types of employment interventions delivered by both government and nonprofit providers. Resources should be reviewed and redirected based on what evidence suggests is the most impactful.
*GAO report