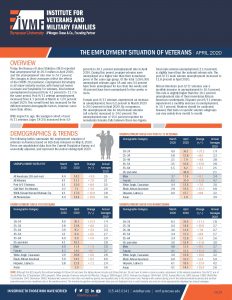 Today, May 8, 2020, the Bureau of Labor Statistics (BLS) reported that employment fell by 20.5 million in April 2020, and the unemployment rate rose to 14.7 percent. The changes in these measures reflect the effects of the COVID-19 pandemic. Employment fell sharply in all major industry sectors, with heavy job losses in leisure and hospitality1. For veterans, total veteran unemployment increased from 4.1 percent to 11.7 in the same period. Post-9/11 veteran unemployment increased from 4.1 percent in March to 13.0 percent in April 2020. This overall trend has increased for the different veteran demographic factors, however, some more than others.

The following tables summarize the employment situation of veterans in America based on BLS data released on May 8, 2020. These are unpublished data from the Current Population Survey, not seasonally adjusted, and represent the period ending April 2020.

NOTE: Although the BLS reports the national average for those 16 and over, the tables above include only those that are 18 and over to make a more accurate comparison to the veteran population. Post-9/11 are of the Gulf War Era II (September 2001-present). Other periods of service include Gulf War Era I (August 1990-August 2001), Vietnam Era (August 1964-April 1975), Korean War (July 1950-January 1955), World War II (December 1941-December 1946). Veterans who served in more than one wartime period are classified only in the most recent one. Veterans who served during one of the selected wartime periods and another peacetime period are classified only in the wartime period. The minority-by-gender unemployment rates are not displayed due to small sample size and are more appropriately displayed as annual averages.